Today (May 6th, 2014 until 8:00 PM ET) we are giving away one signed copy of Nicole C. Kear’s memoir Now I See You. To enter the giveaway, see the bottom of this post. Click here for full information about this individual giveaway and the 23 other books participating in the OMG! All The Books! Giveaway through May 8th. 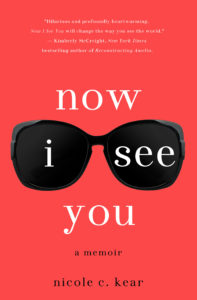 About Today’s Book: Now I See You

“Just because a disability is involved, don’t go thinking somebody’s human spirit is about to triumph all over the place. This memoir has so much more. Now I See You is dark and surprising, wicked and hilarious. Like blindness itself.” – Ryan Knighton, author of Cockeyed

“Even if you’ve never gone to circus school, or driven night-blind through the streets of LA, even if you’ve never wept over knowing that someday you won’t be able to see your baby’s face, you will love every second spent inside Nicole C. Kear’s mind. Now I See You will make you laugh until you cry, bring down your tears until the page swims, and
require you to plough through the laughter and tears to find out what happens next, all because you’ll want to be as courageous, irreverent and in love with life as she is.” – Miranda Beverly-Whittemore, author of Bittersweet and The Effects of Light

The title of my book is Now I See You. My sister-in-law thought of the title over Christmas two years ago, when I begged for help. Like endings, I’ve never been great with titles and my working title was terrible, just a colossally bad match for my book. Now you really want to know what it is, don’t you? Blindsided. Sounds like an action/adventure story starring Bruce Willis, doesn’t it? Believe it or not, it’s the best of the list I’d complied, which mostly featured very pretentious choices, including about fifty permutations of the words in Do Not Go Gentle Into That Good Night, such as Not Go Gentle and That Good Night and probably even Do Not Go. Thank God for sisters-in-law.

I took a seminar in college, about a year after I was diagnosed with the eye disease which my book addresses; the class was called Women’s 20th Century Spiritual Autobiography. It was taught by a rabbi, a nun and a minister and we read the memoirs of everyone from Julian of Norwich to Madeline L’Engle. At the end of the seminar, we all wrote our own autobiographies; mine was called “Star Light Star Bright” and it described my long and arduous process of coping with the prospect of blindness . . . for a whole 12 months. Twelve years later, I decided to revisit the topic, except in a way that wouldn’t make people hurl.

I have a particular fondness for the epilogue of my book. Endings are usually really hard for me to write, a fact which is not surprising when I consider that they are hard for me, conversationally, which is to say, I really can’t shut up. I’m the person who says “Bye!” on the phone and then finds five other pressing things to add before actually hanging up. When you do that in a piece of writing, it just sucks. Because this is a memoir, and the story is my actual life, it was especially hard to know where it would end. And then, one day, I was rocking my infant daughter to sleep and I had one of those explosive “Aha!” moments where I realized: this is the ending. I wrote the epilogue in under an hour and hardly changed a word.

I’d probably be a children’s librarian. I love kids. I love books. And I really, really love kids’ books, starting with Margaret Wise Brown all the way through John Green. I can’t stop myself from acting as a literary matchmaker for my kids, pulling books off the shelves at the Strand and bringing them over with a “Look at this – it’s PERFECT!” – and occasionally, I’m even right (I knew my third grader would like those Chet Gecko books!). Some of my favorite, most enduring memories have been reading to my kids – In The Night Kitchen and Charlotte’s Web and, right now, A Wrinkle in Time.

Nicole is the author of the forthcoming memoir Now I See You,  to be published by St. Martin’s Press in June. She contributes essays and articles to Good Housekeeping, Glamour, Psychology Today, Parents, American Baby, Babble and Salon, and she chronicles her continuing mid-adventures in Mommydom on her blog, A Mom Amok. A native of New York, she received a BA from Yale, a MA from Columbia, and a red nose from the San Francisco School of Circus Arts. She lives in Brooklyn with her husband, three children and two feisty goldfish. You can find her on her website, Facebook and Twitter, and you can watch her book trailer here.

Soon after her diagnosis of retinitis pigmentosa, Nicole C. Kear made a decision to keep her blindness a secret – read about the book here. Have you ever kept something a secret because it was easier than facing it head on?

One winner will win one signed copy of Nicole C. Kear’s memoir Now I See You. Limit one entry per IP address. No purchase necessary. Open to legal residents of the United States, who are the age of 18 or older. Deadline for entry is 8:00 P.M. ET on May 6th, 2014. Read the complete rules.