Today (May 8th, 2014 until 8:00 PM ET) we are giving away one signed copy of Miranda Beverly-Whittemore’s novel Bittersweet. To enter the giveaway, see the bottom of this post. Click here for full information about this individual giveaway and the 23 other books participating in the OMG! All The Books! Giveaway through today.
AND THERE’S MORE!!! We are so pleased to announce that tomorrow, in addition to announcing the grand prize winner of all 24 books, we will also announce ten runners-up, all of whom will win a copy of Bittersweet!

“Before she loathed me, before she loved me, Genevra Katherine Winslow didn’t know that I existed,” begins Mabel, the narrator of Bittersweet, Beverly-Whittemore’s mesmerizing gothic thriller. A scholarship student, Mabel coexists in an uneasy truce with her roommate “Ev,” the wild, willowy daughter of blue-blooded New Yorkers. But an unlikely friendship takes root when Ev suffers a family tragedy and invites Mabel to Winloch, the private lakeside camp where generations of Winslows have summered in Vermont. The girls settle in at Bittersweet, the cottage that Ev has inherited, but there are hints of trouble surrounding the Winslows. Even as Mabel falls for camp life—the family dinners, swimming, fireworks and boating—she realizes things are not what they seem. Why does John, the handyman, install multiple dead bolts on the cottage doors? Why does Ev’s aunt ask Mabel to sort through family papers to find evidence of “blood money?” And what does an old diary reveal of the family’s past? Mabel’s enchantment fades as she pieces together evidence of a family’s malevolence and she wonders who can be trusted when someone is willing to keep the family’s secrets hidden. Bittersweet is worth savoring—it unfolds like a long summer day, leisurely revealing the dark.” – People Magazine

“What begins like Curtis Sittenfeld’s Prep quickly warps into a sickly addictive thriller… think ABC’s Revenge when it was good, only more scandalous… With books like Bittersweet to stuff in beach bags, it’s beginning to feel a lot more like summer. A-” —Entertainment Weekly 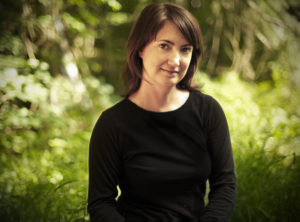 A Short Q & A With Miranda Beverly-Whittemore

I really wrestled with what to call my first two novels; neither were published under their working titles. But Bittersweet has always been Bittersweet; the title stuck from the moment I knew this was going to be a book, and I think it’s because the word works on multiple levels. Bittersweet is: a plant found up around Lake Champlain (where the book is set); the name of the cottage in which much of the book is set; the name of a real cottage that I grew up around (in the place that I’ve fictionalized for the novel); and, most importantly, it’s an emotional state that worked as a lodestar as I was writing the book. I also love that it’s a word made up of opposites. There’s a quiet war in the middle of it, and that sums up the novel as well.

The estate where Bittersweet is set, Winloch, is based on the place where my grandparents have owned land since before I was born (it’s the only home anyone in my family has lived in consistently over the course of my lifetime). It’s a beautiful lakeside retreat where my family comes together every summer, and it couldn’t be any more blissful. But how’s this for the strangeness of the imagination?: I knew, as soon as I wanted to write about the family at the center of Bittersweet, the Winslows, that 1) they live in a very dark version of this place, and 2) they are decidedly NOT nice people. It’s been a real trip to transform a place so close to my heart into this kind of nefarious, mean, fairytale version of itself.

I’m proud of Mabel, the main character of Bittersweet, who is slippery and hard to like and defiant and nosy and quick to judge and lonely and many other things besides. She’s the closest I’ve ever gotten to writing someone who feels “real.”

This book was my attempt to write the kind of book I love to read on vacation, books like Claire Messud’s The Emperor’s Children, Alan Hollinghurst’s The Line of Beauty, Ian McEwan’s Atonement. Books that are well-written with a driving narrative line. Big plot.

A few years ago, I realized that another similarity shared by many of the books I love is the central conceit of an outsider trying to get into an elite circle. Donna Tartt’s The Secret History, for example, or the three books I’ve listed above. Kate Christensen’s The Great Man. Evelyn Waugh’s Brideshead Revisited. F. Scott Fitzgerald’s The Great Gatsby.

I was thrilled by how these books made me ache for something I didn’t even know I wanted—to get “in”—even as I was rooting for the striving characters at the center of each book to have their comeuppance, to be brought back down to my level. Every time I read a book like this, my pulse would increase at that tension, and I realized I wanted to write a book of my own that addressed the same conceit. And so Mabel Dagmar was born…

Miranda Beverly-Whittemore is the author of three novels: Bittersweet (May 2014), The Effects of Light (2005) and Set Me Free (2007), which won the Janet Heidinger Kafka Prize for the best book of fiction by an American woman published in 2007. A recipient of the Crazyhorse Fiction Prize, she lives and writes in Brooklyn and Vermont. In addition to her website (which you’re on right now!), check out (and submit to) her web project about female friendship, FriendStories.com, and visit the Bittersweet Booklaunch Blog, a case study about the year leading up to publication. You can find her on Facebook and Twitter.

In Bittersweet, Mabel Dagmar longs to belong to her best friend’s family, the Winslows – read about the book here. Have you ever wanted to belong to an inner circle? Did you make it in? If so, did you have to sacrifice anything to get there?

One winner will win one signed copy of Miranda Beverly-Whittemore’s novel Bittersweet. Limit one entry per IP address. No purchase necessary. Open to legal residents of the United States, who are the age of 18 or older. Deadline for entry is 8:00 P.M. ET on May 8th, 2014. Read the complete rules.