Today (April 9th, 2014 until 8:00 PM ET) we are giving away one signed copy of Ted Thompson’s novel The Land of Steady Habits. To enter the giveaway, see the bottom of this post. Click here for full information about this individual giveaway and the 23 other books participating in the OMG! All The Books! Giveaway through May 8th. 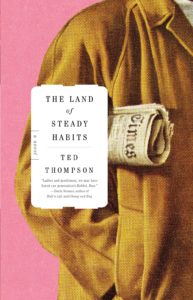 About Today’s Book: The Land of Steady Habits

“Filled with heartache and humor, this assured, compassionate first novel channels the suburban angst of Updike and Cheever, updating the narrative of midlife dissatisfaction with a scathing dissection of America’s imploding economy…With pitch-perfect prose and endearingly melancholy characters, Thompson offers up a heartbreaking vision of an ailing family and country.” – Booklist 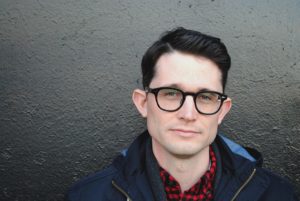 A Short Q & A With Ted Thompson

The Land of Steady Habits is actually an old nickname for the state of Connecticut. Supposedly it was given that name somewhere around the turn of the nineteenth century because of the moral rectitude of its inhabitants. This bit of trivia was called to my attention by my friend Stuart Nadler, who is a brilliant writer and also a trivia buff who was a contestant on Jeopardy. Anyway, state nicknames have always kind of cracked me up, but this one had all of these lovely ironies when placed in the context of the story I was telling. I knew pretty much the moment I saw it that it was the novel’s title.

The book started as a short story, essentially a comedic one-scener about a guy who shows up at his ex-wife’s house on Christmas eve dressed as Santa Claus. Though that premise was kind of broad, and the story didn’t work, I tried for many years to make something of it. It wouldn’t really let me go. Over many drafts that short story grew into a novella, and over many more, into a novel. But the image that wouldn’t leave me alone was always one of this man with a big bag full of presents, ringing the doorbell on his old house, in costume, asking to be let back in. That moment didn’t make it into the final book, but its emotional content informed nearly everything.

I’m not sure, since of course everything comes from inside, but there were several moments when the imagination became more robust and I didn’t have to work so hard. One in particular was actually after I had sold the book, and spent many frustrated months revising it. This wholesale revision wasn’t actually called for by my editor—it was self-directed, based on a sense I had that the book wasn’t yet where I wanted it to be—and after spending several weeks rewriting the same scene over and over, I decided to axe almost everything except the first sixty pages, and start again. And once I did that, this interesting thing happened. The whole first draft had all been written from the point of view of single character—it was a very tight book that way, confined to one consciousness over the course of a short time period. But when I went back to the page, I decided to close my eyes and trust the first sentence that came to me. Turned out it was from another character’s point of view—his wife’s. And once that move was made, everything opened up. In a way, she lifted the curse. It took a long time to find my way to that character, but once I did the novel came relatively quickly.

I grew up in the place where the novel is set, so more than anything I think it was the sense memories of place and setting. My family moved away from Connecticut many years ago, and I haven’t been back there much since, but I did feel like in writing this novel I was spending time with the frozen marshlands and railroad tracks and sandy train station lots of my youth. So much of writing fiction, for me, is about convincing myself as I go along, which I find to be so much easier if I can tack down my story with details I know are true. Oftentimes, through the drafts, I forget where the details came from, and congratulate myself on my incredible powers of invention—until someone in my family reads it and calls me out.

Tough question. On bad days, I still wonder about this. But the moment I first wanted my work to be taken seriously was probably in high school, when I had decided to quit being a jock and try to write a play. (Identity was a little more fluid back then.) I wrote and directed this thing, which was essentially a pastiche of all the sitcoms I had ingested in childhood, and I still remember the moment the audience laughed at that first joke. It seems silly but it was kind of a revelation: I had communicated something. After that, there was pretty much no turning back.

Ted Thompson’s debut novel, The Land of Steady Habits, was published by Little, Brown in late March 2014. His stories have appeared in Tin House, American Short Fiction, Best New American Voices and Electric Literature’s Recommended Reading, among other publications. He received his MFA from the Iowa Writers’ Workshop and fellowships from the Elizabeth George Foundation, the Bread Loaf Writers’ Conference, the Ledig House, and the Truman Capote Trust. He lives in Brooklyn with his wife and their dog, Raisin, and is a proud faculty member at the Sackett Street Writers’ Workshop. You can find him on his website, Instagram and Twitter.

Ted Thompson created a crest for his website that includes his dachshund and glasses – see it here. What two items would you put on your personal crest?

One winner will win one signed copy of Ted Thompson’s novel The Land of Steady Habits. Limit one entry per IP address. No purchase necessary. Open to legal residents of the United States, who are the age of 18 or older. Deadline for entry is 8:00 P.M. ET on April 9th, 2014. Read the complete rules.