Today (April 28th, 2014 until 8:00 PM ET) we are giving away one signed copy of Roxane Gay’s novel, An Untamed State. To enter the giveaway, see the bottom of this post. Click here for full information about this individual giveaway and the 23 other books participating in the OMG! All The Books! Giveaway through May 8th.

About Today’s Book: An Untamed State

“Clear your schedule now! Once you start this book, you will not be able to put it down. An Untamed State is a novel of hope intermingled with fear, a book about possibilities mixed with horror and despair. It is written at a pace that will match your racing heart, and while you find yourself shocked, amazed, devastated, you also dare to hope for the best, for all involved.” – Edwidge Danticat 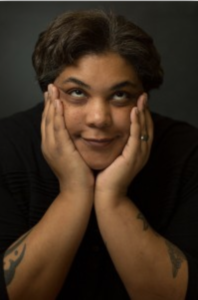 A Short Q & A With Roxane Gay

An Untamed State began as a short story, “Things I Know About Fairy Tales.” Long after the story had been published, these characters, the circumstances that made the story possible, stayed with me and I had to write more of the story.

The deeper I got into the writing of this novel, the more I felt it in my bones and then, I felt it even somewhere deeper. I was fully immersed and even made myself cry at times as I wrote. That’s when I knew the novel had taken on a life of its own, had become a beast that is, like the novel itself, untamed.

During Mireille’s kidnapping, she tries to make herself forget her life and everything she has loved. I’m proud of how I wrote through this act of forgetting.

Lately I’ve been re-reading and thinking a lot about Zadie Smith’s NW, because it is such a polyphonic wonder. Her writing, and that book in particular, make me think anything is possible in my own work.

Roxane Gay’s writing has appeared in Best American Mystery Stories 2014, Best American Short Stories 2012, Best Sex Writing 2012, Oxford American, American Short Fiction, West Branch, Virginia Quarterly Review, NOON, The New York Times Book Review, Bookforum, Time, The Los Angeles Times, The Nation, The Rumpus, Salon, The Wall Street Journal’s Speakeasy culture blog, and many others. She is the co-editor of PANK and essays editor for The Rumpus. Her novel, An Untamed State, will be published by Grove Atlantic and her essay collection, Bad Feminist, will be published by Harper Perennial, both in 2014. You can find her on her website, Twitter, and Tumblr.

On her Tumblr, Roxane Gay often writes about meals she is cooking. What is your favorite comfort food to prepare for yourself and/or your loved ones?

One winner will win one signed copy of Roxane Gay’s novel, An Untamed State. Limit one entry per IP address. No purchase necessary. Open to legal residents of the United States, who are the age of 18 or older. Deadline for entry is 8:00 P.M. ET on April 28th, 2014. Read the complete rules.