Today (April 29th, 2014 until 8:00 PM ET) we are giving away one signed copy of Porochista Khakpour’s novel, The Last Illusion. To enter the giveaway, see the bottom of this post. Click here for full information about this individual giveaway and the 23 other books participating in the OMG! All The Books! Giveaway through May 8th. 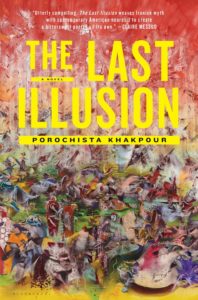 About Today’s Book: The Last Illusion

“An audaciously ambitious novel that teeters along a tightrope but never falls off.

“Following her well-received debut (Sons and Other Flammable Objects, 2007), this Iranian-American novelist returns with what on the surface is a coming-of-age story about a boy who was raised as a bird, based on a myth from the Persian Book of Kings (which finds its way into the story within this story) about an Icarus who becomes a great warrior and hero. The protagonist of this novel is neither. His name is Zal (it rhymes with “fall,” which is what happens to those who cannot fly), and he was born in Iran, very pale and blond in a country of darker skins, to a mother who considered him a mistake and a “White Demon.” His birth sparked his “mother’s disintegration into a crazy bird lady,” and she raised him in a menagerie, as a bird. The tone then shifts, or slides, from once-upon-a-time fable into something closer to American realism, as the setting shifts to New York City around the turn of the millennium. Zal has been adopted by a behavioral analyst who wants to help him develop the human side of his adolescent personality and guide him into adulthood. Zal learns to “keep the bird in him, any bird in him, so deep within himself that it resurfaced only rarely”—though he does retain an appetite for insects and develops a crush on a particularly comely canary (“tiny but still voluptuous, round in all the right places”). In a coincidence that strains credulity, he happens to meet an artist who works with dead birds, who becomes his first love and is something of a strange bird herself. She suffers from anorexia, panic attacks and premonitions, the last of which proves crucial and tragic. And he encounters an illusionist who sparks the novel’s title, planning to make New York disappear: “Not New York, exactly, but the New Yorkness of New York.”

“Plot summary fails to convey the spirit of this creative flight of fancy; farce meets disaster in a novel that illuminates what it means to be human, normal and in love.” — Kirkus, Starred Review 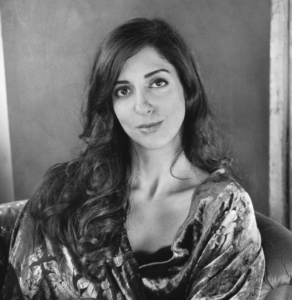 A Short Q & A With Porochista Khakpour

The Last Illusion. It is both literal—a magician’s final illusion before retirement—and figurative, which I will leave to the reader to discover.

My father read me stories from the Shahnameh/the Persian Book of Kings (the national epic of Iran, composed over 1000 years ago) and the story of Zal, the boy raised by a bird, always stuck to me as the most thrilling outsider narrative. Around the same time, David Copperfield’s Statue of Liberty disappearing act aired on television and that also moved me greatly—as a recent immigrant I remember imposing a sort of symbolism on it that may or may not have been part of the illusion. These two influences—along with Robert Penn Warren’s  poetic sequence Audubon: A Vision, a text that I feel saved my life in my 20s—combined in my head to create something altogether new even to me.

It seems to have always been. I followed Toni Morrison’s advice of writing the book I always wanted to read (a bad paraphrase) but I was always a bit in awe of this story, as if I was channeling it at most, that it existed always on some outside plane alongside my life. I saw all the visuals in a sort  of part-comic part-Miyazaki animation in my head.

It’s a mainly fabulist story, but a friend of mine called this my memoir—every character is a version of me, especially my bird boy.

Age 4. We were fleeing Iran’s Islamic Revolution and the Iran-Iraq war and I entertained my parents and myself on a journey across three continents with stories. Books became my one and only entertainment and I often I had to create them to have them. I never stopped.

I don’t know if they have made me think about my writing in new ways exactly, but they certainly are books I love and can see as potential relatives of The Last Illusion (the reading group guide includes these):

Chang-rae Lee’s On Such a Full Sea

Clarice Lispector’s The Hour of the Star

I greatly admire all of the writers, but I know only personally know Scott Cheshire (High as the Horses’ Bridle); Julia Fierro (Cutting Teeth); Roxane Gay (An Untamed State); Edan Lepucki (California); and Joanna Rakoff (My Salinger Year). I feel so lucky to share this season and this year with such outstanding talents who happen to be wonderful people.

I don’t do anything but teach and write and hang out with my dog, but I do wish I could be a full-time investigative journalist perhaps. Or a “hacktivist.” Or produce the journal my dear friend, the late Maggie Estep and I dreamed of creating, Dog Lady Magazine.

Porochista Khakpour is the author of the debut novel Sons and Other Flammable Objects (Grove, 2007)—the 2007 California Book Award winner in “First Fiction,” a Chicago Tribune “Fall’s Best,” and New York Times “Editor’s Choice”—and the forthcoming The Last Illusion, a Most Anticipated Book of 2014 according to Flavorwire, the Millions, and the Huffington Post. She has received fellowships from the NEA, Yaddo, Ucross, Sewanee Writers Conference, Johns Hopkins University, Northwestern University, and many others. Her work has appeared in or is forthcoming in Harper’s, The New York Times, The Los Angeles Times, Salon, Slate, Elle, Spin, and other publications. She currently lives in New York City and teaches at Columbia, Fordham, and Wesleyan. You can find her website, Facebook and Twitter.

“The cover of The Last Illusion features the work of Ali Banisadr – see the cover here. What visual image would you want on the cover of your book?”

One winner will win one signed copy of Porochista Khakpour’s novel The Last Illusion. Limit one entry per IP address. No purchase necessary. Open to legal residents of the United States, who are the age of 18 or older. Deadline for entry is 8:00 P.M. ET on April 29th, 2014. Read the complete rules.