Today (April 14th, 2014 until 8:00 PM ET) we are giving away one signed copy of Mira Jacobs’s novel The Sleepwalker’s Guide to Dancing. To enter the giveaway, see the bottom of this post. Click here for full information about this individual giveaway and the 23 other books participating in the OMG! All The Books! Giveaway through May 8th.

About Today’s Book: The Sleepwalker’s Guide to Dancing

“The Sleepwalker’s Guide to Dancing seizes the reader early and never lets go. Its electricities reside in Mira Jacob’s acute details and the sadness, anger, and humor of her characters. This novel tells many wonderful stories while also telling, beautifully, the story that counts the most.” —Sam Lipsyte, author of The Fun Parts 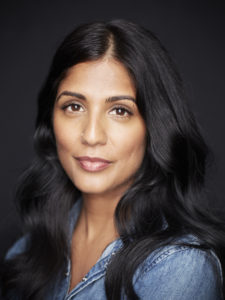 A Short Q & A With Mira Jacob

The Sleepwalker’s Guide to Dancing. For me it’s a hopeful title, one that promises relief for the book’s main characters, all of whom are stuck between the dreaming and waking world.

I wanted to write about watching a crazy-but-charming father lose his mind. I started writing that book. Then my real life crazy-but-charming father got renal cancer and proceeded to die slowly and painfully over three years. I stopped writing almost completely. When I went back, I took out the father that was in the book and put my own father in. I’m sure that I wasn’t supposed to do that, and expect any minute to be struck down by the gods of fiction, but I missed him, and it was the only way to get through it.

Absolutely. For years, the book was the beast that accompanied me through every hour of my day job (I ran editorial teams for websites). Then, when I was laid off out of the blue in 2012, it was the beast that would not tolerate me doing anything else. I knew I should hustle and get another job—I had a young kid at home and bills to pay, but instead I found myself unable to leave a desk for 3 months until it was finally done.

I’m most proud of the structure, which came to me after I’d written the entire book and realized the plot wasn’t quite working. I talked about it with my husband, who is a filmmaker, and he gave me the idea to storyboard, and well, it took. (It took a few weeks to get it right, but yeah, it took.)

Probably with my first book of “poetry” at age 7, though it took me another 15 years to say it out loud. (My parents are Indian. Sometimes my mother will still look at me longingly and say I would have been a wonderful doctor).

Too many to name, but most recently Chimamanda Ngozi Adichie, who isn’t afraid to write about love.

I founded and ran Pete’s Reading Series for 13 years, so I’ve featured many of the other writers at the series. In return, their stories sustained me through writing a book while working full time and raising a kid and generally feeling like I was losing sight of my dream. I’d come in every two weeks, listen to them, and remember why writing mattered. It was like my version of church.

I have a near constant fantasy about becoming a physical therapist. I have sympathy for bodies, for what we put them through.

Mira Jacob is the co-founder of the much-loved Pete’s Reading Series in Brooklyn, where she spent 13 years bringing literary fiction, non-fiction, and poetry to the city’s sweetest stage. Previously, she directed editorial content for various websites, co-authored shoe impresario Kenneth Cole’s autobiography, and wrote VH-1’s Pop-Up Video. Her writing has been published in books, magazines, on television, and across the web. She has appeared on national and local television and radio, and has taught writing to students of all ages in New York, New Mexico, and Barcelona. She lives in Brooklyn with her husband, documentary filmmaker Jed Rothstein, and their son. You can find her on her website, Facebook and Twitter.

The character of Kamala provides a recipe on Mira’s website –  scroll down on this page and click on the white shoe. What’s the name of your favorite recipe?

One winner will win one signed copy of Mira Jacob’s novel The Sleepwalker’s Guide to Dancing. Limit one entry per IP address. No purchase necessary. Open to legal residents of the United States, who are the age of 18 or older. Deadline for entry is 8:00 P.M. ET on April 14th, 2014. Read the complete rules.