Today (April 15th, 2014 until 8:00 PM ET) we are giving away one signed copy of Cristina Henríquez’s novel The Book of Unknown Americans. To enter the giveaway, see the bottom of this post. Click here for full information about this individual giveaway and the 23 other books participating in the OMG! All The Books! Giveaway through May 8th.

About Today’s Book: The Book of Unknown Americans

“Cristina Henríquez’s novel is a triumph not just of storytelling, but of American storytelling, a novel whose breadth and power blow open any traditional definition of ‘American.’ Henríquez pulls us into the lives of her characters with such mastery that we hang on to them just as fiercely as they hang on to one another, and their dreams. This passionate, powerful novel will stay with you long after you’ve turned the final page.” —Ben Fountain, author of Billy Lynn’s Long Halftime Walk 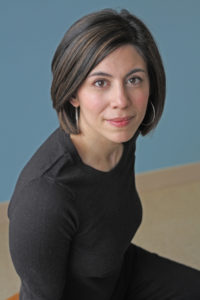 A Short Q & A With Cristina Henríquez

I don’t think I referred to myself a writer until my first book, Come Together, Fall Apart, came out. But maybe that’s not the spirit of the question? Maybe it’s more about identifying the feeling that writing was rooted inside me. That happened in high school.

There was a boy I had a tremendous crush on, and used to follow him around, trying to tell him how I felt about him. I would corner him at parties or call him late at night. Eventually he got so tired of it that he marched into school one day and handed me a blank journal. “Here,” he said. “Why don’t you write down everything you want to say to me for a year, and then give this back to me?” It was brilliant, really. A kind and cunning way of shaking me off. And, because I was under his spell and would have done anything he asked, I agreed to it.

I wrote in that book every night. At first, I wrote to him. But as time went on, I found I was writing for myself. Playful, experimental, raw things that, because I was in high school, were also terribly angsty. But I sort of became addicted to it, and before I knew it, I was writing all the time. I had fallen out of love with the boy and in love with something else. It was a revelation. It changed my life.

I am particularly attached to this line, said by one of the main narrators, Mayor Toro, who is a Panamanian-born, American-raised sixteen year old struggling at times with his own identity. “I wasn’t allowed to claim the thing I felt and I didn’t feel the thing I was supposed to claim.” It’s something I’ve thought about often in my own life.

The title is The Book of Unknown Americans. I felt very strongly that the word “Americans” should be in the title. Some people, no doubt, will dispute whether each of the characters deserves to claim that word, whether they are, in fact, Americans. But by whose definition? Who gets to define what being American means? Does it have to do with a piece of paper, or with a connection you feel, or with how other people see you? It’s a thorny issue and without getting didactic, I wanted to provoke some of those questions.

As for “unknown,” the characters in the book are largely overlooked by society. They are, as one of the characters says, “simultaneously conspicuous and invisible, like an oddity whom everyone noticed by chose to ignore.” My hope is that by the end of the book the characters have been given a chance to step out of the shadows, to become known.

The two books that blew the top off the world for me were Drown by Junot Diaz and The House on Mango Street by Sandra Cisneros. It’s not often that a book really, truly changes you, but both of those did. They both showed me possibility – of what I could write about and how I could write it – where before I had seen none.

If you weren’t a writer, what do you think you would be?

Cristina Henríquez is the author of The Book of Unknown Americans, forthcoming from Knopf in June 2014, as well as the novel The World in Half, and the short story collection Come Together, Fall Apart, which was a New York Times Editors’ Choice selection. Her stories have appeared in The New Yorker, The Atlantic, American Scholar, Glimmer Train, Ploughshares, TriQuarterly, AGNI, and the Virginia Quarterly Review, where she was named one of “Fiction’s New Luminaries.” She is also the recipient of an Alfredo Cisneros Del Moral Foundation Award. Henríquez lives in Illinois with her husband and two children. You can find her on her website, Facebook, and Twitter.

In The Book of Unknown Americans, many of the characters struggle with their identities – read about it here. Was there ever a time when you felt conflicted about your own identity?

One winner will win one signed copy of Cristina Henríquez’s novel The Book of Unknown Americans. Limit one entry per IP address. No purchase necessary. Open to legal residents of the United States, who are the age of 18 or older. Deadline for entry is 8:00 P.M. ET on April 15th, 2014. Read the complete rules.