Today (May 2nd, 2014 until 8:00 PM ET) we are giving away one signed copy of Celeste Ng’s Everything I Never Told You. To enter the giveaway, see the bottom of this post. Click here for full information about this individual giveaway and the 23 other books participating in the OMG! All The Books! Giveaway through May 8th. 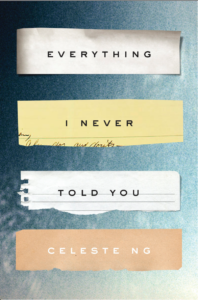 About Today’s Book: Everything I Never Told You

“What happens when a family constellation loses a star? Do the others fall out of orbit or pull closer together? When sixteen-year-old Lydia disappears, her Chinese-American father and American mother can barely speak to one another. Lydia’s brother and younger sister try to stay below the radar. Each of them knows something about Lydia’s life—the pressure to be someone she’s not, to live the life in science that slipped through her mother’s grasp, to be popular, not an outsider like her father. And what does their wild neighbor Jack know about Lydia—was he really the last to see her? So many secrets, so many questions—personal struggles, cultural struggles, and a tragic mystery to solve, this is a compulsively readable debut.”  – Gail Vinett, Ingram Content Group

A Short Q & A With Celeste Ng

Although this book isn’t at all autobiographical, I – like most writers – drew on my life for many of the details. I furnished the Lees’ house of the late 1970s with some of the things I remembered from childhood: rotary phones with cords that I used to coil round my pinky; a record player with an arm weighted by a stack of pennies; the alarm clock whose numbers literally turned over with a little click. On a macro level, when I was growing up, my family was one of the only Asian families in our community, much like the Lee family in the novel, so I drew on that experience of being culturally – and visually – different from everyone around you.

More interesting, maybe, is some of the stuff I had to make up. My parents were both scientists, and they gave me a lot of science-related books, just as Marilyn does with Lydia – though it didn’t have the same effect on me, thankfully. I wanted to give Lydia the exact books I’d had as a kid – like Nobel Prize Women in Science and I Will Be a Doctor!: The Story of America’s First Woman Physician – but I couldn’t: they weren’t published until the late ’80s or early ’90s, or even later. In fact, I couldn’t find any real books from the 1960s or 1970s that a mother might give her daughter to make her think a career in medicine, or any sciences, was even a possibility. So I had to make up all of the science books in the novel. It was a startling reminder of how different things were for women just a generation ago.

My novel is called Everything I Never Told You – it came to me during the first draft, when I was roughing out the final scene of the book; it’s an echo of one of the very last lines. It struck me as just the right title for a book that’s about the secrets family members keep from each other, and the gnawing, futile desire to piece together a loved one’s life after they’ve died.

There are a lot, but here are the big ones: The God of Small Things really shook up my notions of how you could zigzag through time to tell a story, and showed me just how pliable language can be. It’s amazing. The Known World opened me up to a lot of possibilities about how history – or imagined history – could intersect with fiction. And pretty much everything Gish Jen has written, from Who’s Irish to The Love Wife to Tiger Writing, makes me think harder about how I tackle issues of culture clash, race, and identity.

If you weren’t a writer, what would you be?

As a kid I first wanted to be a paleontologist, then an investigative journalist (a la Lois Lane). At various points in my life, I’ve made a living as a proofreader and a miniaturist – no, for real, I made scale miniatures, mostly of food. It all sounds random, but the common link is an obsession with details: whether it’s painstakingly excavating fossils, doggedly uncovering facts, meticulously correcting punctuation, or sculpting veins into a lettuce leaf smaller than a dime, the small stuff has always been important to me. That carries over into my writing as well – I love the telling detail, and I love arranging those details to make a larger picture. So if I weren’t a writer, maybe I’d be a nanoscientist, or a watchmaker. Or a Lego Master Builder! Really, anything where I got to use the small stuff to make the big stuff.

Celeste Ng is the author of the forthcoming novel Everything I Never Told You (June 2014, Penguin Press). Her stories and essays have appeared in One Story, Five Chapters, Gulf Coast, the Bellevue Literary Review, The Millions, The Huffington Post, and elsewhere, and she has been awarded the Pushcart Prize, the Hopwood Award, and a scholarship to the Bread Loaf Writers’ Conference. She earned an MFA from the University of Michigan (now the Helen Zell Writers’ Program at the University of Michigan) and has taught writing at the University of Michigan and Grub Street in Boston.  She lives in Cambridge, Massachusetts. You can find her on her website, Twitter and Facebook.

“In Everything I Never Told You, all of the characters wrestle with expectations about how they should lead their lives – read about the novel here. Was there ever a time when you struggled with your parents’ expectations for you?”

One winner will win one signed copy of Celeste Ng’s novel Everything I Never Told You. Limit one entry per IP address. No purchase necessary. Open to legal residents of the United States, who are the age of 18 or older. Deadline for entry is 8:00 P.M. ET on May 2nd, 2014. Read the complete rules.