Today (April 18th, 2014 until 8:00 PM ET) we are giving away one signed copy of Scott Cheshire’s novel High As The Horses’ Bridles. To enter the giveaway, see the bottom of this post. Click here for full information about this individual giveaway and the 23 other books participating in the OMG! All The Books! Giveaway through May 8th. 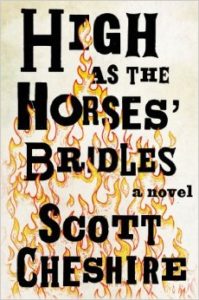 About Today’s Book: High As The Horses’ Bridles

“An unflinching exploration of American apocalyptic yearning. So many things at once, High as the Horses’ Bridles is the heartbreaking story of a family, of a marriage, of the undying affection between a father and his son, and the redemptive power of love. It also happens to be a deep look at one of the more unsettling aspects of our national character—religion as desire. This is a rare and beautiful debut that will have readers thinking of Aleksandar Hemon, of E.L Doctorow, of Don DeLillo.” – Colum McCann

“From its opening tour de force to its equally extraordinary conclusion, Scott Cheshire’s debut is searing and fierce. His protagonist, Josiah Laudermilk, provides a rare bridge from our familiar everyday to the strange, rich territory of Evangelical Christianity—and back again. Josiah’s – and Cheshire’s – brilliant evocations make the whole world new. This novel is truly memorable.” – Claire Messud 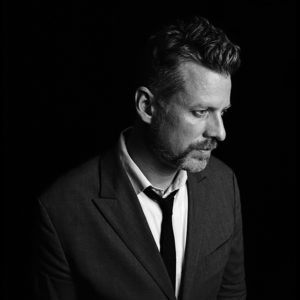 A Short Q & A With Scott Cheshire

The title of the book is High as the Horses’ Bridles, a lovely phrase. And I can say that because it’s not mine. It comes from the book of Revelation, and sounds rather Americana-esque, and poetic, which I like, but actually refers to the depth of blood in the streets when Armageddon strikes. So it’s a frightening phrase, really, and it comes up a few times in the book as the main narrator, Josiah, comes to better and better understand its violent implications. In some ways I think of the book as a journey from literalism to metaphor, and that phrase is the bridge.

I have always been intensely interested in religion as a subject, especially the history of American apocalyptic religiosity. I was raised as one of Jehovah’s Witnesses, but pretty early on I discovered that particular life was not for me, and so I started the process of disentanglement from that world at about seventeen. That was over twenty years ago, now, and yet still the subject fascinates me. I tried to write about it for years, but it was always too close, too solipsistic, all about me. Until I one day started writing about my personal experience, as well as the national experience, that particular strain in the American character. And early on, I was always drawn to writers that explore the idea of transcendence, Melville, Emerson, Whitman. All of that fed this book.

I guess I’m especially proud of the structure, which was certainly the most difficult thing to make—to make work, I should say. The novel is about apocalyptic longing, the religious wish for The End. Which really just comes from the very human wish to have life make some sort of narrative sense, have a beginning, middle, an end, for life and death to make sense. And yet this is nothing really new. There’s a super lyric from a Wilco song: “Every generation thinks it’s the end of the world.”  Which sort of sums it up in a pithy way. The epigraph of the novel, which represents a similar sentiment, comes from the scholar James Berger: “Apocalypse is our history.” I think that’s true of humanity, metaphorically true of our nation, and literally true of many families. The novel explores all of that, and I tried to structure it in such a way that it approximates Berger’s idea.

It’s funny, I’m writing an essay about this topic right now. After lots of thought I’ve come to see that three of the more formative books for me were: 1 – Don DeLillo’s The Names—partly because that book delves deeply into the apocalyptic possibilities of language, and mostly because it started a deep love for DeLillo’s work. 2 – Marilynne Robinson’s Gilead—because that book helped me understand that a novel about religion need not be a religious book, and also because that book introduced me to her work; she is one of my favorite living writers. And 3: Max Frisch’s Montauk—because this was the first time I’d read a novel that felt so intensely personal, as if the writer were using the writing of the novel to better understand himself, and not character. But of course, there is Grace Paley, too, and Donald Barthelme, and Javiar Marias, and plenty more.

Absolutely. Juila Fierro is my boss, hahaha. So I have to say nice things… I kid. Julia is a good friend, a brilliant writer, a tireless supporter and leader of the book community. I love her novel, and we are always looking for ways to help each other. For instance, I co-host a podcast on writing, called The Workshop, whereon we interview writers and talk about writing and reading, and we are happy to have her on the show.

This is interesting, and I’ve never been asked it before. I would say my two great loves are music and books. I tried reading for a living, I was an editor for a while, but it turns out you don’t get to read what you want, haha, and so that was not for me. So I guess I’ll say music. I was in a few bands when I was younger, all terrible bands making very bad music. But I loved it. And music definitely figures in my writing, it often appears in the work, but I also listen to lots of music as I write. Usually it’s jazz or instrumental music, both veering on the strange and more experimental side. For High as the Horses’ Bridles it was mostly records by the guitarists Nels Cline, and Thurston Moore, and Cinder by Dirty Three. This new project has me listening to lots of Terry Riley, and the later cosmic records by John Coltrane.

Scott Cheshire earned his MFA from Hunter College. He is the interview editor at the Tottenville Review and teaches writing at the Sackett Street Writers’ Workshop. His work has been published in Slice, AGNI, Guernica and Picador’s The Book of Men. His first novel High as the Horses’ Bridles is forthcoming from Henry Holt. He lives in New York City. You can find him on his website, Facebook, and Twitter.

The main character of High As The Horses’ Bridles returns home after a long time away, and is surprised at what he discovers there – read about it here. Have you ever returned to a place from which you’ve long been absent and found it to be different than you remember?

One winner will win one signed copy of Scott Cheshire’s novel High As The Horses’ Bridles. Limit one entry per IP address. No purchase necessary. Open to legal residents of the United States, who are the age of 18 or older. Deadline for entry is 8:00 P.M. ET on April 18th, 2014. Read the complete rules.