Today (April 10th, 2014 until 8:00 PM ET) we are giving away one signed copy of Jean Kwok’s novel Mambo in Chinatown. To enter the giveaway, see the bottom of this post. Click here for full information about this individual giveaway and the 23 other books participating in the OMG! All The Books! Giveaway through May 8th. 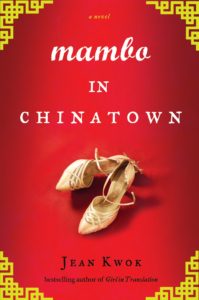 About Today’s Book: Mambo in Chinatown

“The kind of book where I put it down, closed my eyes, and the characters were still dancing in my mind. Sweet and lovely, filled with old-world tradition, Chinese superstition, and the complicated dance of forbidden love.” — Jamie Ford, New York Times bestselling author of Hotel on the Corner of Bitter and Sweet

Twenty-two-year-old Charlie Wong grew up in New York’s Chinatown, the older daughter of a Beijing ballerina and a noodle maker. Though an ABC (American-born Chinese), Charlie’s entire world has been limited to this small area. Now grown, she lives in the same tiny apartment with her widower father and her eleven-year-old sister, and works— miserably—as a dishwasher.

But when she lands a job as a receptionist at a ballroom dance studio, Charlie gains access to a world she hardly knew existed, and everything she once took to be certain turns upside down. Gradually, at the dance studio, awkward Charlie’s natural talents begin to emerge. With them, her perspective, expectations, and sense of self are transformed—something she must take great pains to hide from her father and his suspicion of all things western. As Charlie blossoms, though, her sister becomes chronically ill. When Pa insists on treating his ailing child exclusively with eastern practices to no avail, Charlie is forced to try to reconcile her two selves and her two worlds— eastern and western, old world and new—to rescue her little sister without sacrificing her newfound confidence and identity.

A Short Q & A with Jean Kwok

When I was an immigrant child growing up in an unheated apartment in the slums of Brooklyn, I desperately envied my friends who took ballet lessons. There was no time for any sort of extracurricular activities in a working class life. After school, I went with my family to the sweatshop in Chinatown and worked there until late in the night, even though I was only a child then.

It wasn’t until many years later when I was studying at Harvard that I dared explore the things I loved: writing and dance. I’d entered college as a physics major, determined to embark on a financially stable career, but finally felt safe enough there to believe that I would never need to return to my life at the clothing factory. I became an English major and dreamed of being a writer. At the same time, I started taking dance lessons and thereby discovered my other passion.

After graduation, I was searching for a day job to support my writing and stumbled across an ad in the newspaper that read, “Wanted: Professional Ballroom Dancer, Will Train.” Somehow, miraculously, I survived the interview, audition and three-week training class to be hired by Fred Astaire Studios in New York City. I worked for three years as a professional ballroom dancer and won Top Professional Female in national competition before leaving to attend the MFA program at Columbia University.

That combination of my working class background and my life in ballroom provided the basis for Mambo in Chinatown.

Which part of this book is most important to you?

I wanted to tell the stories of the Asian Americans who don’t often appear in the media – namely, the low-achieving ones. I wrote this book for all of the people, regardless of race, who are invisible to us: the ones we pass every day in taxis, restaurants and dry cleaners, whose stories often go untold. Most people who escape from a life of low-wage labor choose professions like medicine or accounting. They don’t tend to become writers. It was a difficult choice for me as well but in the end, I’m glad I have the privilege of trying to write about the worlds I have left behind. Although my own life is now quite different, my heart remains in Chinatown.

For me, fiction is always an indirect way of revealing the truth. I was born with a gift for school but at home, I was not considered very bright or successful at all. Just like my heroine Charlie, I was terrible at cooking, cleaning and listening to orders. I was a disaster as a Chinese daughter. I’ve often thought that without my ability at school, I would very likely be a dishwasher at a restaurant somewhere, just as Charlie is in the novel. I wanted to tell the story of an awkward young woman living a life of poverty who discovers something she loves – ballroom dance – and thereby unlocks her own gifts. I wanted to reveal both the professional ballroom dance world and the microcosm of Chinatown to my readers.

So much of the novel comes from my own experience. I used to go dancing in Spanish Harlem, just as Charlie does in the book. I went to my interview at the dance studio in the exact outfit Charlie wears: an oversized red dress, a clashing red turban wrapped around her badly-cut hair, and black pumps she has filled in with magic marker to cover their worn patches.

When I was working as a ballroom dancer, my father was ill and my family treated him exclusively with Eastern medicine. I fought to get him to a hospital for diagnostic tests. This struggle between East and West re-emerges in the novel as well, as Charlie’s little sister Lisa becomes sick and their family only wants her to use traditional Eastern healing techniques.

All of these elements are woven into the fabric of the book: a father’s concern for his children, the guilt and love between two sisters, the passion of a young woman discovering her own gifts.

I came up with a plethora of terrible titles, including Heavenly Bodies, which in only two words manages to suggest pornography, science fiction and Chinese people having sex in space. At this new low point, my editor said hastily, “You know, Jean, I think Mambo in Chinatown is perfect and you don’t need to think up any other titles. Really.”

There were two clear turning points in my life. The first was when I left science to become a writer, and the second was when I left dance, again to become a writer. I’d already worked in three laboratories in high school and I’d skipped my freshman year when I entered Harvard so that I could get my masters in physics in four years. I was that determined to become a physicist. There is a part of me that still thinks like a scientist. I need to be able to see the structure of my books in my mind. I’m not capable of writing a very messy novel, brilliant as those can be. Although I am often surprised by the twists and turns the creative process takes along the way, I do my best to ensure that the final fictional reality is one continuous, engaging and coherent dream.

The other part of me is the dancer. I was tempted to stay in ballroom for the rest of my life. When I was dancing, I ran into my former Harvard professor, Helen Vendler, at a Seamus Heaney reading and she said, ‘Jean, you must return to the flock.’ Deep down, I knew she was right. However, being a dancer has changed me. Through dance, I rejoice and I grieve; I touch the boundaries of my experience as a woman and a human being. Both writing and dancing are ways of accessing the deepest parts of my soul. So there you have it: I’m part scientist, part dancer, and all writer.

Jean Kwok immigrated from Hong Kong to Brooklyn when she was five and worked in a Chinatown clothing factory for much of her childhood. She won early admission to Harvard, where she held as many as four jobs at a time, and graduated with honors in English and American literature, before going on to earn an MFA in fiction at Columbia. In between her degrees, she worked for three years as a professional ballroom dancer for Fred Astaire Studios. Her debut novel Girl in Translation was a New York Times bestseller, has been published in 17 countries and is assigned in universities, colleges and high schools across the world. Her second novel Mambo in Chinatown is about a young woman torn between her family duties in Chinatown and her escape into the world of ballroom dancing. Jean lives in the Netherlands with her husband and two sons. You can find her on her website, Facebook and Twitter.

Mambo in Chinatown’s main character falls in love with ballroom dancing despite her family’s concerns – see a description here. Which one of your hobbies or interests would most surprise your friends and family?

One winner will win one signed copy of Jean Kwok’s novel Mambo in Chinatown. Limit one entry per IP address. No purchase necessary. Open to legal residents of the United States, who are the age of 18 or older. Deadline for entry is 8:00 P.M. ET on April 10, 2014. Read the complete rules.