Today (April 11th, 2014 until 8:00 PM ET) we are giving away one signed copy of Caeli Wolfson Widger’s novel Real Happy Family. To enter the giveaway, see the bottom of this post. Click here for full information about this individual giveaway and the 23 other books participating in the OMG! All The Books! Giveaway through May 8th.

Real Happy Family has been described in reviews as a “page-turner that strikes the balance between humor and heart;” a member of the “Tolstoyan literary tradition, offer[ing] both a scathing social critique and a sympathetic look at relationships and moral indiscretions;” a “sharply funny [skewering] of Hollywood fame-seekers;” and “an unsparing take on damaged family ecosystems [that] makes for compulsive reading.” 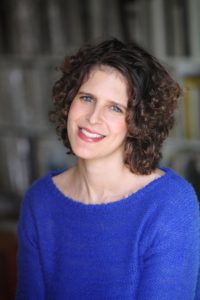 A Short Q & A With Caeli Wolfson Widger

Real Happy Family, because it’s the name of the reality show that provides the backdrop for the core story line.

Real Happy Family started brewing shortly after I’d moved from Brooklyn to L.A. and felt like I’d landed on a different planet. I don’t mean this in the typical ‘LA is so shallow and materialistic and NYC is so substantial and thinky’ – I didn’t feel negative or judgmental toward LA, but more fascinated in an anthropological way. The breezy countenances everyone seemed to wear, the ubiquitious vanity, the strange speech patterns (The ‘love you!’s tossed between people who barely knew each other, for example, how all women call everyone ‘honey’ or ‘baby’) flip flops and sparkly painted toes and perky boobs on all women, regardless of age, etc. The casual assumption by so many of the new moms I’d met that they’d take their young kids to auditions. The sense of possibility! Cliched as it sounds, I really felt it, gold-rush style, that maybe my then-1-year-old, COULD become the new face of BabyGap (we went to one audition and left after about 8 minutes).

Around this time, I got pregnant with my 2nd kid and bought an elliptical machine and began to watch reality TV while I exercised in the evening because it pleasantly numbed my brain and passed the time quickly. Particularly the Hills and the Real Housewives series, and I began to wonder about the backstories of this shiny, outwardly vacuous people who seemed to believe their ticket to fame and fortune was just…being themselves. One night I watched Audrina Patridge’s mom have a complete meltdown on TV because she thought Audrina’d been slighted for something or other. And the next morning, when I sat down to write (I’d committed myself to 1,000 words a day no matter what), she was the first topic that came to mind, and I started writing about her. Eventually, she evolved into Colleen, and soon Colleen needed relationships (as well as complexity and compassion), so the other characters emerged from her. So I’d say my early observations of SoCal culture, combined with some reality TV personalities, were the initial triggers for the book.  I wanted to try to get into the psychology of a place & type of people fundamentally different from (and fascinating to) me…

I was surprised by how often I cracked myself up. Honestly, I didn’t know I was funny until humor turned up on the page and started making other people laugh (I wouldn’t trust it if it were only me cracking up)!

Not consciously, but I’d say I discovered elements of my own life in my characters after I’d begun to flesh them out. In early drafts, I believed I had a great deal of distance from my characters, and thinking I’d explore them as curiosities, but I ended up feeling much more connected to them — particularly Colleen (the deeply insecure 40something mom) and Robin (the very-secure 30something trustafarian who’s a powerful career-woman but just wants to be a mom) – than I anticipated. This is the sneaky way fiction works:  you set out to stay as far away from yourself as possible and up digging uncomfortably deep, and even revealing facets of yourself indirectly that you’d never be willing to expose in, say, a personal essay. Colleen’s weight obsession, for example, and her chronic insecurity in a crowded room. Robin’s conflicted entrepreneurialism (I’ve held down a day job as a self-employed headhunter for the past 10ish years). Darren (Robin’s filmmaker husband) ‘s artistic purism but low ouput (I didn’t REALLY start writing seriously – daily and with discipline and purpose – until I was 35, despite identifying as a writer and refusing to cultivate a nonartistic career beyond the bare minimum) – I found parts of myself in these characters.

Age 9, lying in bed at night during a thunderstorm, got up and wrote my first poem in my diary, titled The Night Opera (a true masterpiece, obviously), and it felt both like I’d made sense of what I’d been feeling but also that I’d opened the gateway to something more expansive…and I was hooked.

Julia Fierro and I are literary kindred spirits. I met her in a workshop she was teaching. It changed my life. I’m not being dramatic.  I had always considered myself a poet and knew nothing about fiction, and I turned a story in to Julia and she said, ‘You could publish this, you know,’ and she’s been one of my best friends in the world ever since. We went through the process of finding agents and selling our books together, and being able to support each other and commiserate was absolutely crucial to my sanity.

Prior to joining the faculty of Writing Workshops Los Angeles, Caeli Wolfson Widger worked as the assistant director of Brooklyn’s Sackett Street Workshop and taught creative writing at University College London and the University of Montana. Her debut novel, Real Happy Family, was published in 2014, and her recent work has appeared in the New York Times Magazine and on NPR.  Caeli is a graduate of Wellesley College and holds an MFA from the University of Montana. She lives in Santa Monica with her husband and three children. You can find her on her website and Twitter.

Los Angeles is an integral part of Real Happy Family and is prominent in its book trailer – view it here. The Los Angeles Times has described the book as depicting the city of Los Angeles as “a superficial veneer [that] belies a more complicated truth.” How would you describe a place where you live (or a place that you love)?

One winner will win one signed copy of Caeli Wolfson Widgers’s novel Real Happy Family. Limit one entry per IP address. No purchase necessary. Open to legal residents of the United States, who are the age of 18 or older. Deadline for entry is 8:00 P.M. ET on April 11, 2014. Read the complete rules.