Today (April 30th, 2014 until 8:00 PM ET) we are giving away one signed copy of Brian Gresko’s anthology When I First Held You. To enter the giveaway, see the bottom of this post. Click here for full information about this individual giveaway and the 23 other books participating in the OMG! All The Books! Giveaway through May 8th.

About Today’s Book: When I First Held You

“Full of humor, heart, and brilliance, When I First Held You contains everything I wish I’d known (but probably wasn’t ready to hear) about fatherhood before I became a father. Over and over again, as I read the essays Brian Gresko has deftly gathered here, I wanted to grab my wife, my son, and even strangers on the train and point emphatically at one line or another to say, ‘This! This is what it’s like.’ The failures and triumphs of fatherhood have never sounded better than they do in the words of these fine writers.” – Kristopher Jansma, author of The Unchangeable Spots of Leopards 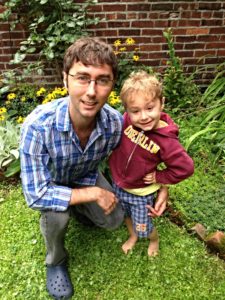 A Short Q & A With Brian Gresko

The title When I First Held You comes from the cliché that women feel like mothers when they find out they are pregnant, but for men the feeling of fatherhood doesn’t hit until they first hold their child, that’s when it becomes real. It’s an image that appears in several of the essays, and without my prompting the authors to include it.

More personally, it comes from something my father said to me. I’m talking about John, my adoptive dad. John had been engaged to my mom, twice, but they broke it off, and later she became pregnant with this other guy’s kid. He was a teenager who didn’t want the responsibility of fatherhood. My mom turned to John for support and friendship, and slowly they rekindled their relationship, though of course there was uncertainty about whether it would work out. John said that despite those worries, when he first held me, he knew that he would stick around, that he wanted to be there to see me grow up.

The title plays out for me in another way as well. The intense emotional reality of fatherhood didn’t come over me until my son grabbed my finger with his little hand for the first time, when he was hooked up to monitors, intubated in the NICU recovering from a traumatic birth. So that phrase, when I first held you, refers to both my dad and my son holding me. And damn if I don’t feel like a baby a lot of the time, emotionally, being carried into emotional landscapes and new understandings of myself by the people I love; in particular, at this point in my life, by my little boy.

I was writing about parenting for The Huffington Post, which led to work for an AOL Patch site, and eventually Babble, where I still write. But in the course of my MFA I had conducted a few author interviews, and after graduating I placed those pieces, which led to conducting other interviews and penning reviews and critical essays. So I had my feet in two worlds: the parenting and the literary. My agent, the remarkable Erin Harris at Folio Literary Agency, asked if there was a way to combine the two, and wondered if I might interview authors about fatherhood. Over the course of a brainstorming dinner this evolved into the idea of an anthology. I have her to thank for getting the project started. Like all good agents, she had a better, longer view of my work then I was able to have down in the sentence trenches.

I continue to find new answers to this question, which maybe sounds a little weird, but I’ve been shy about calling myself a writer. Partly because I’m insecure and feel like I can’t put myself in the same category of the writers whom I admire, but also because I come from a working class background where what you earn and own is valued, and it’s so damn hard making money writing that I sometimes feel like it’s a really time-consuming hobby. Also, while I am a grown-up parent who writes, I tend to put quotation marks around all of those terms in my mind. I feel like I still have so much to learn! And identifying myself as a writer (or a grown-up, or even a parent) carries a sort of security and confidence that I don’t always feel.

Because of that, for about three years I called myself a stay-at-home dad first and a writer second. It wasn’t until after the anthology proposal sold that I reversed that order. And still the goalposts keep moving down the field, as I dream of publishing a novel, and short stories, and then I’m sure I’ll aspire to other forms of recognition. Writing is something I do, but being a writer is something else. Before writing I taught middle school, and before that I produced websites, so part of me still hesitates from thinking that this is it, that I am “a writer” and that I won’t end up trying my hand at something else either because I get tired of it or, more likely, out of economic necessity.

This is an easy one for me to answer – editing this collection was like taking a master class in essay writing. I had little idea what each contributor was going to write until the essay came into my inbox. I used to tell people that receiving their essays was like getting a gift, but the real gift was in working with these guys, all very dedicated, brilliant wordsmiths, to polish their pieces for the book. I got a little buzz being that close to their process; it was so instructive to see the decisions being made over drafts, even the slight adjustments in the copyediting. Now when I’m working I hear their voices in my head, encouraging me to try something new, or open up full throttle emotionally, or loosen up and be a bit more playful, more bold. The editing made me a better writer, and I’ll always be personally grateful to the contributors for trusting me enough to let me into their process.

Brian Gresko is the editor of the anthology When I First Held You: 22 Critically Acclaimed Writers Talk About the Triumphs, Challenges, and Transformative Experience of Fatherhood, out May 6th from Berkley Books/Penguin. His work has appeared in Poets & Writers, Glimmer Train Stories, and Slice Literary Magazine, and on The Huffington Post, Salon, The Atlantic.com, The Daily Beast, The Paris Review Daily, the Los Angeles Review of Books, The Rumpus, and Babble. Brian lives with his family in Brooklyn. You can find him on his website, Facebook, Twitter and Instagram.

The contributors to When I First Held You write about the transformative experience of becoming fathers – read more about the book here. What is an experience that has transformed you?

One winner will win one signed copy of Brian Gresko’s anthology When I First Held You. Limit one entry per IP address. No purchase necessary. Open to legal residents of the United States, who are the age of 18 or older. Deadline for entry is 8:00 P.M. ET on April 30th, 2014. Read the complete rules.