Today (April 16th, 2014 until 8:00 PM ET) we are giving away one signed copy of Alexi Zentner’s novel The Lobster Kings. To enter the giveaway, see the bottom of this post. Click here for full information about this individual giveaway and the 23 other books participating in the OMG! All The Books! Giveaway through May 8th.

About Today’s Book: The Lobster Kings

“With its strong female lead and its evocative setting, this could well be Zentner’s breakout book.” – Booklist

“Confirms what Touch already prophesied: Alexi Zentner is one of the greatest literary architects and mythmakers working today.”—Téa Obreht, The Tiger’s Wife

“The Lobster Kings is a powerhouse of a novel. Alexi Zentner proves himself to be a writer of the first rank.” – Ben Fountain, Billy Lynn’s Long Halftime Walk

From the internationally acclaimed author of Touch, praised as “breathtaking” (People) and “lovely…at once dreamy and riveting” (Washington Post), comes a powerful family saga steeped in the legends of the sea. Set in a fishing village, The Lobster Kings introduces a fiery and unforgettable heroine, Cordelia Kings.

The Kings family has lived on Loosewood Island for three hundred years, blessed with the bounty of the sea. But for the Kings, this blessing comes with a curse: the loss of every firstborn son. Now, Woody Kings, the leader of the island’s lobster fishing community and the family patriarch, teeters on the throne, and Cordelia, the oldest of Woody’s three daughters, stands to inherit the crown. To do so, however, she must defend her island from meth dealers from the mainland while navigating sibling rivalry and the vulnerable nature of her own heart when she falls in love with her sternman.

Inspired by King Lear, The Lobster Kings is the story of Cordelia’s struggle to maintain her island’s way of life in the face of danger from offshore and the rich, looming, mythical legacy of her family’s namesake. 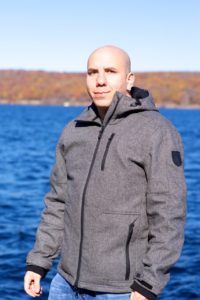 A Short Q & A With Alexi Zentner

That’s an easy one. The family name is Kings, and they’ve been fishing lobster for nearly 300 years on the same mythical island. I had the title almost from the first pages.

The Lobster Kings is, ostensibly, about a fishing village off the coast of Maine and Nova Scotia, but it’s an homage to King Lear and is really about fathers and daughters and the pressure of family history. I was really interested in what it meant to be a young woman trying to step into a role – in this case, lobster fishing – that has traditionally been reserved for men. I’m the father of two young girls, and I hope they end up as strong-willed as my narrator, Cordelia. It’s also a book that is very much rooted in the landscape of the rocks and the water of that part of the world.

The Lobster Kings is very loosely based on King Lear, and I first read the play when I was in college. My Shakespeare professor was this older man who was slowly going blind, and he’d committed to trying to memorize the complete works of Shakespeare before he lost his sight. And I remember when we were studying Lear, when we were at the section on the heath when Lear is mourning, and he cries out “never” five times, this professor almost came to tears. I was so struck in that moment — and still today — the way that art can resonate through years and generations. That moment is, slightly retold, in the book.

I’ve told this story a bunch, but I know the exact moment that I’d made the right decision. I’ve wanted to be a writer my whole life, but it took me a long time to realize that I also wanted to write, and that being a writer and wanting to write aren’t always the same thing. So when my daughters were very small, when I was still staying home with them, I decided to give it a real go. We hired a sitter to come in for two hours twice a week. At the time, the money for the sitter was a big deal, and I remember, after a few weeks of this, handing my wife a short story to read. I was in the middle of finishing our basement, and I went downstairs to deal with some drywall, and when I came back upstairs about twenty minutes later, my wife was sitting on the couch, holding the story and crying. She looked at me and said, “we should keep the babysitter.” That story ended up being part of the first chapter of my first novel, Touch, and that was when I first knew for sure that I was a writer.

If I weren’t a writer, I’d be a teacher, though maybe that’s cheating, because I’m already a teacher. I’m an assistant professor at Binghamton University and I teach in the low-residency MFA program at Sierra Nevada College. An early mentor of mine once told me that he doesn’t believe anybody is a born teacher, but that I challenged that belief. The only thing that comes close to matching that excitement of writing something new is being in the classroom and seeing a student suddenly understand something about how fiction works that she didn’t understand before. I’ve also been very lucky to have other writers be generous to me, and I like being able to help writers figure out their path. And on a purely selfish level, talking about literature — how a story works or fails to work — and really engaging with students in the questions of craft and art, almost always helps me to learn.

Alexi Zentner is the author of the novels The Lobster Kings and Touch. Touch has been published in twelve countries, and The Lobster Kings will be published in at least six. Touch was shortlisted for The 2011 Governor General’s Literary Award, The Center for Fiction’s 2011 Flahery-Dunnan First Novel Prize, the 2012 VCU Cabell First Novelist Award, and the 2011 Amazon.ca First Novel Award, and longlisted for the 2011 Scotiabank Giller Prize, and the 2013 International IMPAC Dublin Literary Award. Alexi’s fiction has appeared or is forthcoming in The Atlantic Monthly, Narrative Magazine, Tin House, Glimmer Train, and many other publications. You can find him on his website, Facebook and Twitter.

The Lobster Kings draws on Shakespeare’s King Lear for inspiration – read more about it here. What piece of classic literature is inspiring to you?

One winner will win one signed copy of Alexi Zentner’s novel The Lobster Kings. Limit one entry per IP address. No purchase necessary. Open to legal residents of the United States, who are the age of 18 or older. Deadline for entry is 8:00 P.M. ET on April 16th, 2014. Read the complete rules.